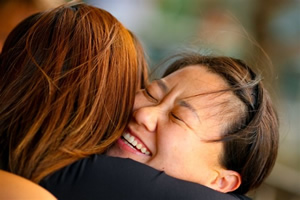 Most everything starts off well. A marriage, a friendship, a ministry in the church… People are excited and the future is bright. Laughter fills the lunch table and the conversation centers around dreams for the future.

The entire law is summed up in a single command: “Love your neighbor as yourself.” If you keep on biting and devouring each other, watch out or you will be destroyed by each other (Gal. 5:14).

This verse takes the cookies off the top shelf and brings them to the bottom shelf! Same cookies, mind you, but now I can reach them, considering my soaring 5–foot, 7–? inch frame. (That half–inch is very important).

“Love your neighbor as yourself.”

But of course, even though simple, some will do their best to add confusion. A Lawyer did in Luke 10:29. Adept in the art of confusion, we find these words: “And wishing to justify himself, the lawyer said: ‘And who is my neighbor?’”

Jesus then tells the story affectionately known as the “Good Samaritan.” He defines what a neighbor is. In a simple explanation, a neighbor is different than a friend.

You see, “friends” are the people you choose. Neighbors are the ones God chooses.

It’s easy to love friends. After all, you chose them. You like them, and they like you. You talk the same language and there is a synergy.

But sometimes friends turn into neighbors. They are still near you (in the workplace, at home, in the classroom), but I wouldn’t “choose” to work with them if it were up to me!

It’s at this stage, the “love” we espoused and all the “team–work” ideals we said “amen” to, will be tested… for its strength, elasticity, and depth.

When a friend becomes a neighbor…

This may happen several times in our life, and if this course is navigated well, a neighbor will becomes a friend… again.

How does this all slip into the danger zone? It doesn’t happen all at once.

I remember “play–scrapping” with my brother. We imagined that we were ninjas. All in slow motion with Japanese words for effect. He did the slow flying kicks, and I did the low roundhouse moves. We would turn in sequence as if Columbia Pictures had their lenses on us! He had bare fists, and I had some nunchucks. I wasn’t the most proficient at using those little sticks tied together with a floppy chain. (Can you see it coming?)

On one of my expert moves, the sticks got a bit out of hand, and one of them found its mark on my brother’s forehead.

An immediate ruby red welt announced the area of his concern, and everything came to an abrupt halt. Then, it was like a nuclear blast. Before my eyes, my own brother was transformed into a wild–eyed terrorist on steroids. He mounted an attack of punches, slaps, and words that were not Japanese at all!

I started running as fast as I could in hopes that my mother was near. She wasn’t. (Till this day, I still face the door when I eat in restaurants).

We can get that way with each another.

What starts out with an innocent jab here and there, an innocent complaint, a lunchtime grumble… and no sooner than you realize, it’s an all–out brawl. People quit. Others depress their hurts. Some will subtly sabotage who they dislike, and still others continue but under a pretense of unity. But it only erupts again one day into an all out rough and tumble leaving collateral damage… “in the name of God.”

It happens in families, in staff, in churches, in friendships. I guess we don’t know when to quit.

We’ve all been on both ends of the nunchucks.

In these last days, we as the people of God must do away with pretense. Struggle, yes. Arm wrestle, yes. But stay on the same team. Forgiveness along with improvement must be normal and plenteous. Forgiveness and improvement are not mutually exclusive. They take place together.

Now, I am not advocating a “sloppy agape” where forgiveness is synonymous with being soft on sin. I am not endorsing the violation of biblical principles. When unresolved sin is left alone, it brings infection… and infection ignored leads to amputation.

That’s an issue of passive leadership.

I am, however, charging us to:

1) Know when to stop biting, and

2) Know how to say, “I’m sorry” and mean it. It’s time to stay as brothers and not silent enemies in the same camp.

So much to learn about love. The best quality of love is a tested love, one that has survived the struggles and has risen victorious. That is the Love that God has for us. That’s the kind He asks us to have for another.