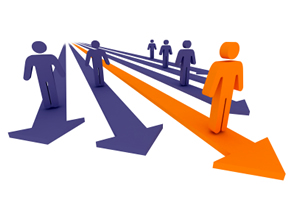 The world is crying out for ‘authentic’leaders who will not only lead by passion but who will lead by example. And this is where I want to stay for the rest of my brief time with you.

Recently I was catching a flight from Delhi, India. It was a zoo getting through customs and getting a place in line to clear security was a feeding frenzy among famished lions.

A 60-ish year old American dressed in Monk clothes walked by pushing his luggage cart. His head was shaved and under each armpit was a crutch. He wasn’t using them mind you. He just carried them as he walked.

Behind him a young monk girl with enough piercing to convince anyone that she had barely survived a fight with a stapler, followed closely. He opted out of standing in line with the others, and instead brashly pushed his cart, crutches, and girlfriend, to the head of the line. Just then, the man in front of me barked: “Hey, get in the back of the line.”

At that, the monk raised one of his crutches as if to remind us that he was entitled to cuts because he had a ‘handicap’ as part of his luggage. “I don’t care,” the grumbler shot back.“Get in line!” The Monk returned fire and exploded an expletive loud enough for all to hear … but one that I won’t repeat. (This is a “G” rated article on leadership.) I laughed quietly under my breath thinking, “We live in such an dysfunctional world that inconsistency in leadership is normal.”

You can teach what you know, but ultimately you will reproduce what you are.

That is the bottom line of leadership legacy. We determine the shelf life of our influence by the depth of how consistently we live out what we teach. Incongruent living is the curse of leadership in America. Inconsistent leadership may convince; it can even sway. It can persuade and even convert … but in the long run, it will not last.

We need leadership that lasts and that only comes with leaders who are genuine, clear to the bone.

Here are a few leadership essentials for those who will last:

Leadership can become a fad for a decade, a buzzword for book sales, a mantra among corporations. Or it can be a reality that we’ve come to that will transform our futures. Don’t settle for anything less or you might be found waving a crutch yelling, “#@*$% ! Can’t you see I’m a leader!?”

And no one does.