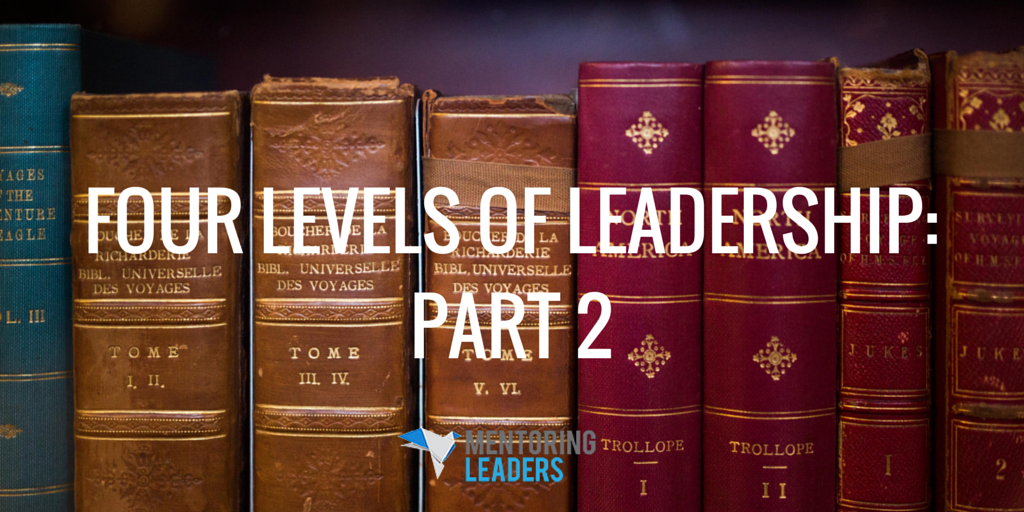 There are four levels of leadership, and the first three have been given the capacity to hold you in its grasp. Let’s look at them all, and then we will view each individually.

Let’s take some time to look at the final two.

At the turn of the 21st Century, the fault lines of Corporate Leadership began to surface. It was in the marketplace that this discrepancy was first noticed. Christian businessmen blew the trumpet (or the whistle) and began to herald character and morals in business. John Maxwell, Ken Blanchard, Steven Covey, Jim Collins, Pat Lencioni, and several others became spokespersons for character-based leadership.

Integrity, teamwork, honesty, trust, and marital fidelity were proclaimed as success principles. Christians and non-Christians alike agreed on character-based principles as the only way to sustain success in any endeavor.

Churches were the first to adopt this style of leadership, and thousands bought into Character-Based Leadership without abandoning the corporate. But even that began to lack something. It was moral and upstanding, but the eternal sparkle was noticeable missing. Sold out seminars and conferences became the norm, but still there was an elephant in the room.

Allow me to challenge you further to the greatest level of leadership. You can’t stop at any of these first three levels. It will be like the house in Luke 11:25 that was “swept and put in order,” yet it wasn’t enough to keep the enemy of our sols at bay. It had no eternal power or authority to transform.

The highest and most sustaining level of leadership is Christ like leadership.This is where you see beyond what is seen and you hear beyond what is heard. It is developing inner ears and spiritual eyes to discern motives that lie behind actions. It holds the foresight to discern the results or consequences of current decisions. It is committed to the best not only in oneself, but in the lives and futures of others. It takes into account eternal significances.

It’s the difference between and amateur chess player and one who sees six or seven moves in his head before he makes one of his own.

These gifts are crucial to leadership in the 21st Century church and in the 21st Century family, but it is only available to those who hang around with the Author of Christ like Leadership. It comes only with a non-compromising devotion to God and His Word. It is cultivated through a daily, ongoing time at His feet as Mary did in Luke 10:39-40

It is granted to those who love to walk in His presence and posture themselves in such a way that their hearts are consistently awaiting His audience. It includes business sense. It welcomes critical thinkers. His presence congratulates students of impeccable morality, but in and of itself is incomplete.

Leadership in the 21st Century that gains God’s favor will require more than business savvy. It is bestowed on those who will be so unashamed as to walk with a consistent, unfettered relationship with Jesus, meeting with Him dally and talking with Him constantly. It is one of a reckless abandon the cause of Christ rather than to an economic bottom line. It is the willingness to invest and “lose” temporal money in order to gain eternal souls. It is the unabashed love for one’s spouse and family. It is learning people skills without learning people pleasing. It is a willingness to lay down ones own life and profit for the eternal benefit of others.

When the world is crying out for leaders, heaven is calling those who want to lead like Christ.

This is the first of a two-part series from the Mentoring Leaders Storehouse. Tell us what you think!