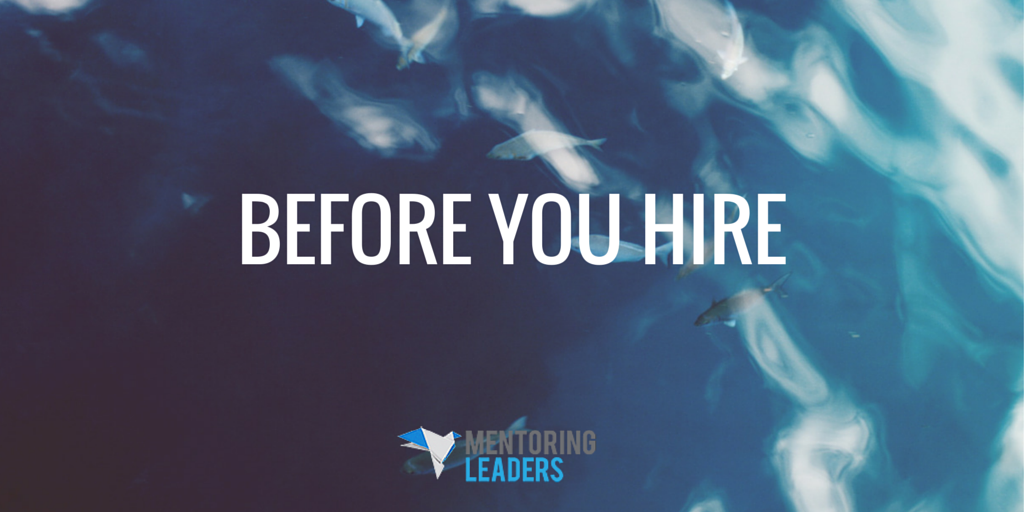 One of the most common mistakes leaders make is hiring too soon.

Here’s a tip that may alleviate some of the pain later on. Often, we don’t have qualified people that enter our ranks, and we must choose from whom God provides, but we can get antsy and hire too quickly.

Your first step when you see a need, is not to hire a person. Instead, architect a fishing pond, or a team of people that will do the job as volunteers. In early Hawaii, wise fishermen did that. They would build a fishpond, attract fish, and then let them grow unto harvest time.

You are harvesting leaders, so learn to build fishponds. You are building a pool from which great leaders may emerge. This gives you time to watch their potential increase or their flaws surface. I would allow them six months or so, and watch how they interact and see whom God will raise up and whom He does not.

David gives us further mentoring in verses 6 & 7 in his 75th entry of Psalms:

If you hire, be sure this process has already taken place … that the Lord has revealed to you who He is setting up, otherwise you will have a rude awakening in a year or two, and it will have cost you thousands.

Then, from the fishpond, you can see who the Lord has His hand on. And when you hire, find the best of the best. My suggestion is that when you offer them some salary, give them a stipend or a part time pay so they won’t have to leave another job. Then, watch to see if their fruitfulness in ministry increases or not. It should increase! If not, you are wasting money. Allow them to volunteer. But if you remunerate them and allow them to spend more time in a certain initiative, and the fruit increases, you may be onto something.

Then watch how others respond. Do others on the team respect that person or do they resent him? Of course, you will always have the naysayers, but generally, do people look confused, or do they rejoice in your attempt to formalize leadership roles? If there is a mutiny, you may want to step back and recheck your bearings. But at least you can do it before an over-amount of damage is done.

Fish Ponds… learn how to build them. Let them grow, then fish. You just may find some great leaders swimming around!