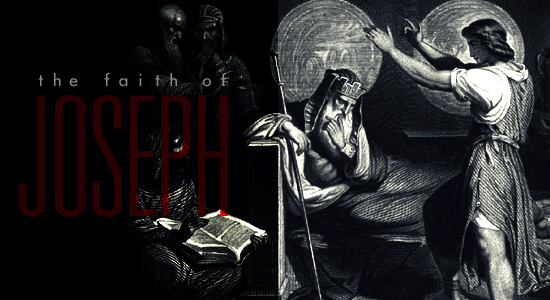 Joseph was someone who no one recognized and no one though God would want to use him, but He did. He was engaged to a woman named Mary. Joseph discovers the terrible news that this girl he is to marry is pregnant and he knows it is not his.

In the midst of the betrothal, Joseph hears the terrible news that this woman to whom he has already committed in public, is pregnant by somebody that is not him. Do you understand the anguish that he goes through? He is already committed to this woman. What should he do?

After Joseph wrestled with the doubts, the struggles, temptations, anger and anguish—after he had considered these things—God knew He better send an angel to resolve this … and He did. God does not send angels that often. He does that on very special occasions.

“Now the birth of Jesus Christ was as follows: When His mother Mary had been betrothed to Joseph, before they came together she was found to be with child by the Holy Spirit. And Joseph her husband, being a righteous man and not wanting to disgrace her, planned to send her away secretly.

But when he had considered this, behold, an angel of the Lord appeared to him in a dream and said, ‘Joseph, son of David, do not be afraid to take Mary as your wife; for the Child who has been conceived in her is of the Holy Spirit. She will bear a Son; and you shall call Him Jesus, for He will save His people from their sins.’

Now all this took place to fulfill what was spoken by the Lord through the prophet:

‘Behold, the virgin shall be with child and shall bear a son, and they shall call his name Immanuel, which translated means “God with us.”’

And Joseph awoke from his sleep and did as the angel of the Lord had commanded him, and took Mary” (Matt. 1:18-25).

Joseph was in a struggle. It was a harsh struggle, but he won. That is the good news.

He got up from the dream and he did exactly as the Lord has asked him to do. However, his struggles were not yet over.

The next time we hear about Joseph is when he is in his ancestral town where his wife was ready to give birth. When Joseph went back to Bethlehem, where his relatives were, he still had no place for his wife to give birth to their first-born child. There was no room. His relatives would not even allow him a bed because of a stigma that was ongoing with Joseph. So Joseph then has to find a barn, a place with a good floor. He is still wrestling and struggling, but he is going to be a man of faith and he is going to win.

God is going to use three things to be a GPS system in your life.

Know the Difference Between:

Your conscience is a body of knowledge that justifies or judges you. It will excuse you or it will hold you accountable. If you do not have an accurate conscience, you are going to have inaccurate decisions.

When you have a good heart, a clear conscience and a sincere faith, you start making much better decisions.

“But the goal of our instruction is love from a pure heart and a good conscience and a sincere faith. For some men, straying from these things, have turned aside to fruitless discussion” (1 Tim. 1:5-6).

When you do not have an accurate faith working with a clear conscience, you turn aside to fruitless discussion and weird conclusions.

The Holy Spirit will be your guide in the midst of your journey.

Here is a neat promise of the Holy Spirit in the New Testament. We do not have to wait for an angelic visitation. The Holy Spirit says, “I will do that and I will speak to you every day.” As we develop a healthy conscience, we add to that element of an accurate faith and the Holy Spirit’s voice begins to guide us.

“But when He, the Spirit of truth comes in, He will guide you into all truth, for He will not speak on His own initiatives, but whatever He hears, He will speak” (John 16:13).

The Holy Spirit will guide you. That is His assignment — to help you to make the right decision.

God will use three elements — the first thing He will use to give you a GPS on your life is your conscience. That must be mixed with an accurate faith. Then, learn to hear the voice of the Holy Spirit. When you do, you start to make decisions that will give you the right projection.