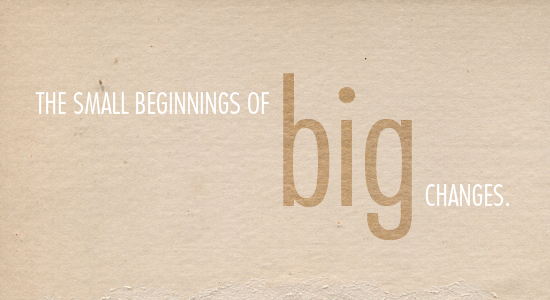 You know how God’s work begins? It’s not in big, radical ways, but in small beginnings. Every one of us can be a part of the Kingdom of God if we realize that it starts in small ways. Isn’t it true that small things make such a huge difference? It begins with the hearts with which things are done in small groups. You lose that heart and you lose it all.

It’s the mustard seed beginning because everybody can be a part of the Kingdom of God — not just those of us who can sing or dance and have large talents and large gifts, but everybody; every single one of us.

Some may say, “Well, I can’t dance, I can’t sing, I can’t preach …” No, no, everyone can be a part of this. In this next season, let’s start with mustard seed in action.

In Matthew, John the Baptist was in the river baptizing all of these people who had come out of sin. Jesus—the sinless Son of God—walked into the river. John looked up and recognized Him as the Lamb of God, and He was coming to be baptized by John.

John tried to prevent Him by saying, “I shouldn’t be baptizing You; You should be baptizing me. It’s not that big of a deal.” Do you know what Jesus’ answer was?

“But Jesus answering said to him, ‘Permit it at this time; for in this way it is fitting for us to fulfill all righteousness.’ Then he permitted Him” (Matt. 3:15).

Something that God requires happens in the small things. When John said, “This is just a small thing,” Jesus said, “No, you let this happen.” Some of these things seem small to us, but just do it because it is huge in the Kingdom.

Small involvements are what build the Kingdom. It’s not large acts, but small acts. It’s obvious things; it’s not anything you have to train for. God will open up an opportunity and it is an obvious need — set up a chair, pick up a piece of paper. It’s just these little things, these small involvements.

We see this in the Good Samaritan. It was an obvious need — a man needed help. Two of three people scooted around this man, thinking, “Somebody else should help him.” But the third one went by and he was a Samaritan. He said, “I’m not going to wait for another person trained in these things. There is a need; I’m just going to jump in.”

Jesus tells the story and then He summarizes at the end what the meaning is:

“‘Which of these three do you think proved to be a neighbor to the man who fell into the robbers’ hands?’ And he said, ‘The one who showed mercy toward him.’ Then Jesus said to him, ‘Go and do the same’” (Luke 10:36-37).

You would be surprised at the amount of people who are waiting for a small invitation. Did you know that most of the disciples came to Christ by somebody inviting them?

Can you see how they were just inviting each other? The Kingdom of God is built by small invitations.

You see, the Kingdom of God starts in small ways — small gestures, small involvements, small invitations. God delights in that and that’s why Zechariah 4:10 says, “Do not despise these small beginnings, for the Lord rejoices to see the work begin …”

As we continue through this year, let’s all be people of small gestures, small involvements, small invitations and you watch what is about to take place. Indeed, our greatest days are still ahead of us. Let’s be people of mustard seed faith.